The use of Appsody’s tools and provided Stacks simplifies the steps and knowledge required to build “cloud packaged”, “cloud native” and “cloud functions” based applications.

Appsody’s nodejs-express Stack makes it easy to go beyond making an application “cloud packaged” (which you can see how to do with the basic nodejs Appsody Stack). It creates “cloud native” applications that use the capabilities of the cloud platform by providing built-in “Cloud Native” capabilities such as liveness, readiness, metrics, and observability.

The following tutorial, shows you how to create a new cloud-native Express.js application that uses the nodejs-express Stack.

To follow this tutorial, you need to install both the Appsody CLI and Docker.

Install the Appsody CLI by following the Installing Appsody guide for your platform.

New Appsody based applications are created by using appsody init <stack> <template>, where the stack is chosen by you from the stacks that are listed when you run appsody list. The init command downloads the most recent copy of the Appsody Stack, and populates the project directory with the specified template.

The Express.js Appsody stack provides two templates: simple and scaffold. Simple, the default template, provides a basic Express app and is used when a template is not specified. The scaffold template has more boilerplate.

The init command needs to be run inside in a new project directory. Appsody uses the name of the directory as the default name for the project.

This provides output similar to the following:

The init command downloads the default simple project template that provides a basic project structure, along with the latest nodejs-express Stack which is a container image that contains:

Looking at the app.js file in detail, it contains the following:

The code creates an instance of an Express.js app, and then registers a handler for get() requests on / that sends a response of "Hello from Appsody!". It must export a function that returns an Express router or application. The function is called with an options argument, which can be ignored. For more information about the options argument, see the nodejs-express Stack README. The app is mounted at the application root.

The express-pino-logger is registered as middleware, so:

The interface for the nodejs-express Stack changed in version 0.4. This tutorial has been updated to use the 0.4.6 version of the Stack.

Now that you have created your application, the next step is to see it running. To do that you can use the appsody run command in a terminal window. Alternatively, if you use VS Code, you can use the tasks that have been configured in the .vscode directory that was added as part of the template project.

Whichever method you choose, a continuous development environment is started for your application, running inside a container.

In addition to the handler for get requests on / that was defined in app.js, some other capabilities have been added by the Appsody Stack itself. These include health, liveness and readiness endpoints, a metrics endpoint, and an application performance analysis dashboard (during development only).

The Appsody CLI also provides test and debug capabilities, and the built-in Performance Dashboard can be used for performance analysis.

These work in exactly the same way that they do for the base nodejs Appsody Stack. You can see how to use those capabilities in the “Package your Node.js app for Cloud with Appsody” article.

Using the Metrics endpoint on /metrics

The Metrics endpoint that is automatically added as part of the nodejs-express Stack is designed to work with the Prometheus open source monitoring system.

While Prometheus can be run anywhere, it is also designed to integrate easily into a Kubernetes environment, and has been embraced by Kubernetes itself — with many of its components exposing metrics for Prometheus to collect.

This means that, once deployed into Kubernetes, you can visualize data both from your application, and from Kubernetes itself.

An instance of Prometheus can easily be setup locally by running it in a container, using its container image from DockerHub. To do that, you first need to setup a configuration file to tell Prometheus what to monitor, and then run with that file:

The scrape_configs section tells Prometheus which applications to monitor, their location and port. By default, Prometheus will make http requests on /metrics.

For our nodejs-app app, the target has an address of host.docker.internal. This is a special address that tells Docker to connect to the localhost of the machine on which the Docker container is running.

The address host.docker.internal address is specific to Docker Desktop.

The following view is shown where you can display graphs and data:

Before doing that, first see what “targets” Prometheus is collecting data from:

This shows a list of two servers that Prometheus is collecting data from:

This show that Prometheus is collecting data itself as well as your application, and that both have a state of UP.

This displays a graph of the the performance of requests to various HTTP endpoints in your application: 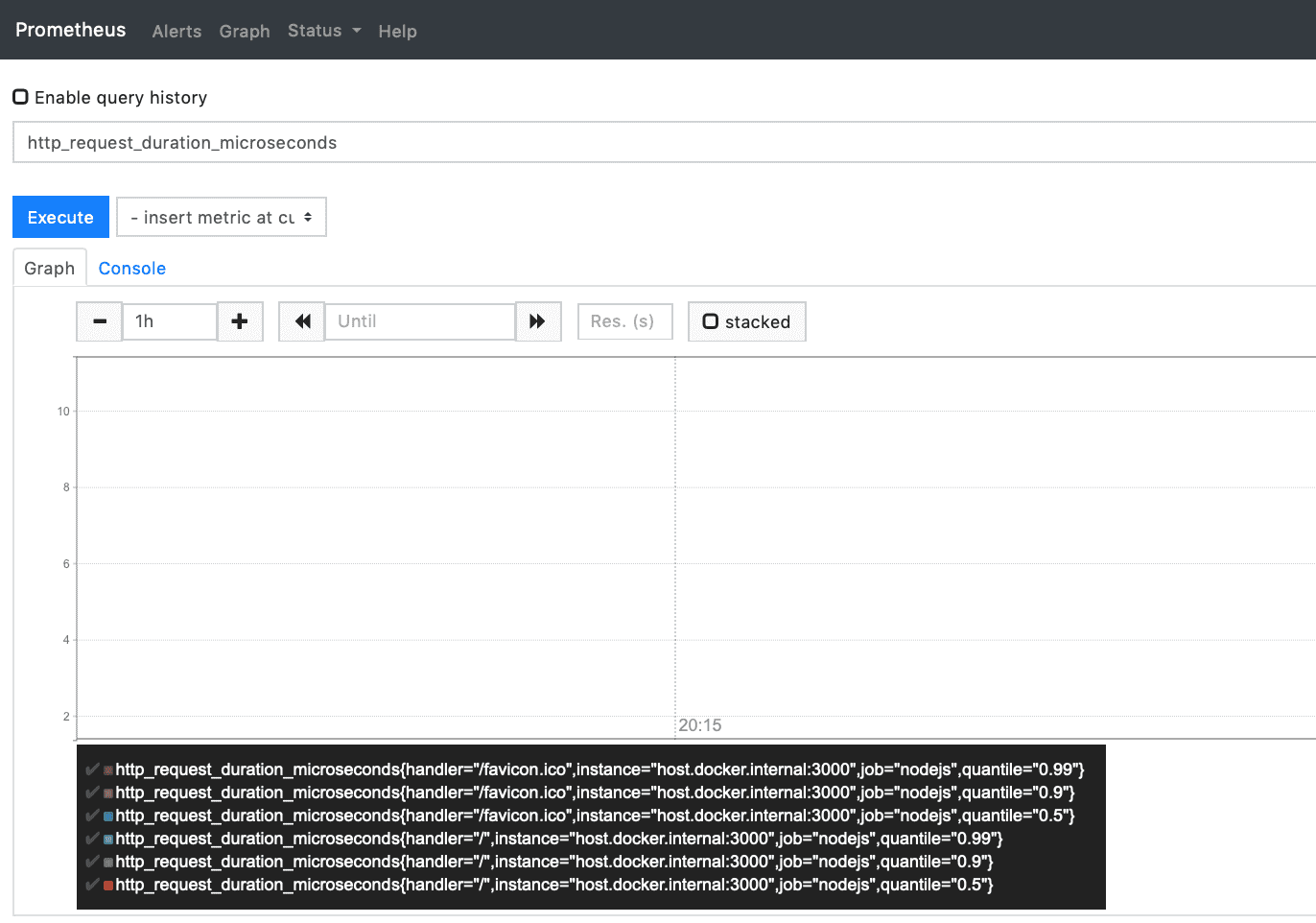 This shows that Prometheus has data for requests against / and /favicon.ico. 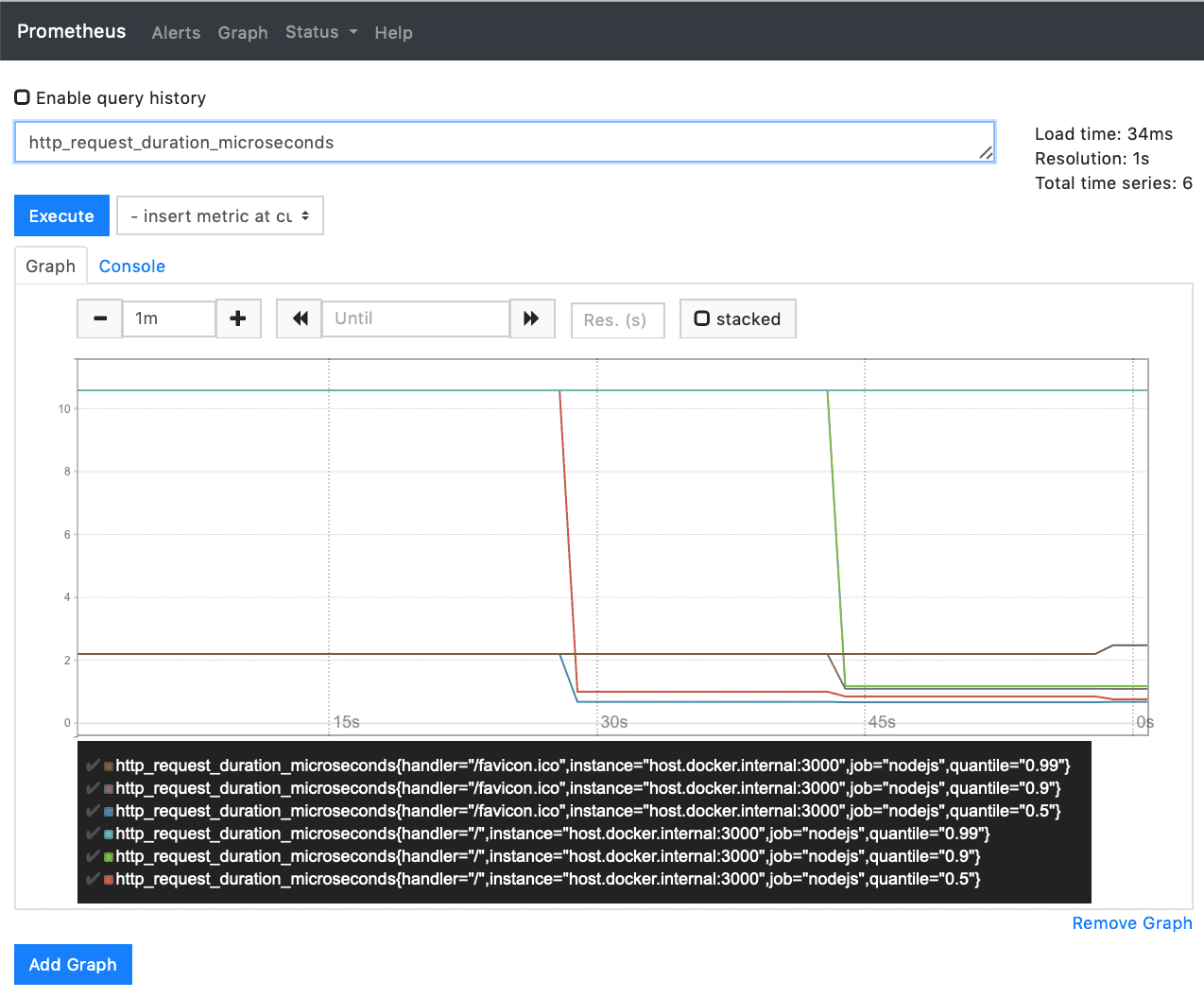 The graph now shows the variation in performance as the application is responding to ongoing requests.

Prometheus provides the ability to build simple graphs and alerts. However, it is also designed to be used with more advanced graphing and dashboarding solutions. The most frequently used being Grafana.

Grafana can also easily be setup and run locally using its container image from DockerHub, you can then connect it to the running Prometheus instance. To do that, you first need to run Grafana itself, and then configure it to use your Prometheus server so that it has access to the data that Prometheus is collecting.

Adding a data source in Grafana

Creating a new Dashboard in Grafana

This creates a new dashboard for you, in which you can start to create panels to display visualizations, queries and data.

This opens a new query and visualization panel.

and then click on the graph at the top of the panel. 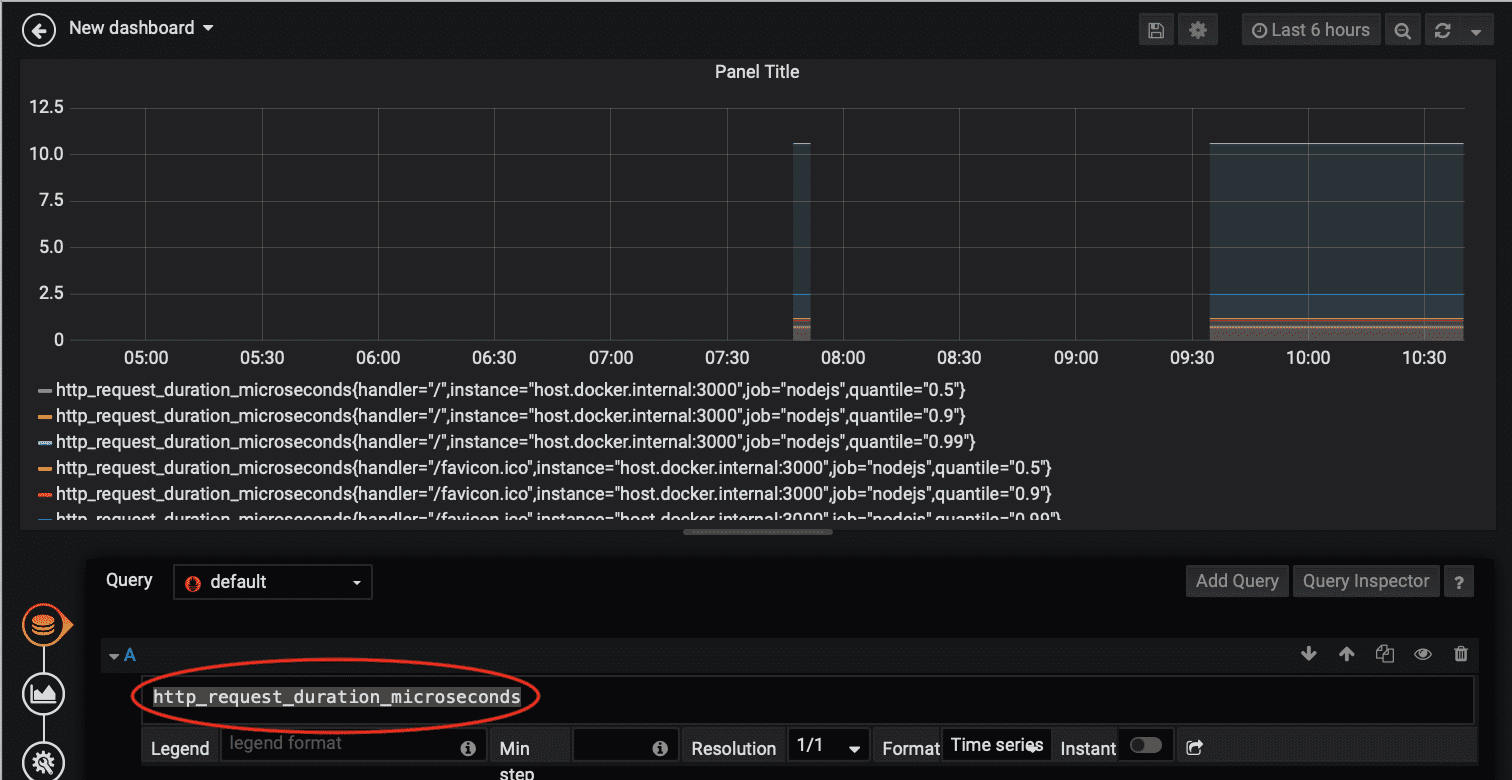 Adding a query and creating a graph

It now displays a chart of the HTTP responsiveness for all of the applications that Prometheus is collecting data from.

and then click on the graph at the top of the panel.

This has filtered the graph to only display data from the application with the job name of nodejs-app — this is the value you set for your application in the prometheus.yml file when you started Prometheus — and then divides the data by 1000 to give a time in milliseconds rather than microseconds.

Grafana makes it possible to build rich and dynamic dashboards so that you can visualize your data however you wish. It also lets you import pre-built dashboards.

To see the catalog of available dashboards, visit the Dashboards page on Grafana.com.

Finally, to shut down Prometheus and Grafana, you need to stop their running containers. You can do that with the following two commands:

This tutorial covered how to build a new “Cloud-Native” Express.js application using the nodejs-express Appsody Stack which automatically provides the application with cloud-native capabilities such as liveness and readiness checks, along with metrics and observability.