Package your Node.js app for Cloud with Appsody

The use of Appsody's tools and provided Stacks simplifies the steps and knowledge required to build "cloud packaged", "cloud native" and "cloud functions" based applications.

The following tutorial, shows you how to take a sample Node.js application, and package it into a best-practise container image using the Appsody CLI and the nodejs Stack.

To follow this tutorial, you need to install both the Appsody CLI and Docker. You also need a Node.js application to cloud package.

Install the Appsody CLI by following the Installing Appsody guide for your platform.

You need a Node.js app to package. You can either use one you already have, or create a sample Express.js app by using the following steps:

This displays the following output:

Your sample application is now ready to use!

Enabling your application with the nodejs Appsody Stack

New Appsody based applications are created by using appsody init <stack> <template>, where the stack is chosen by you from the stacks that are listed when you run appsody list. The init command downloads the most recent copy of the Appsody Stack, and populates the project directory with a template that provides a basic project structure.

In order to enable an existing application with a stack, the same steps can be followed, but passing the option none to appsody init, as a project structure is not required.

This provides output similar to the following:

As well as downloading the latest version of the Appsody Stack (in this case version 0.3), this has added a .appsody-config.yaml file to the project, which configures the versions of the Stack that the project will use.

At this point, your application has been enabled, which means you can now run, test and debug your application in a continuous containerized environment provided by the Appsody Stack, to build it into a optimized container image, and to deploy it to Kubernetes.

Working with your application

Appsody's run command provides a continuous development environment, where changes that are saved to your project cause your application to be restarted. This is similar to the experience you get from tools like nodemon, but this occurs inside the containerized environment. The only requirement is that your application's package.json file needs to include a start script.

The following steps show you how that works for your application:

Alternatively you can open a second terminal window so that you can edit the application files.

As appsody run provides a continuous development environment, any code changes you make will cause an automatic restart of the application.

b) Change the file contents to:

c) Save the file

You may need to refresh the page to see the change.

This provides a continuous, containerized development environment where you can almost instantly see any changes you make reflected in the application running in the browser.

Carrying out Performance Analysis of your application

As part of the development environment, both appsody run and appsody debug also provide a performance monitoring and profiling dashboard that uses the appmetrics-dash module. This feature is available during development only and it enables you to do analysis of your application.

This provides a display similar to the following, which provides data for:

This starts to collect function profiling data from the application, and to visualize it using a flame graph, which provides a visualization of the stacks and functions that are using most CPU time. 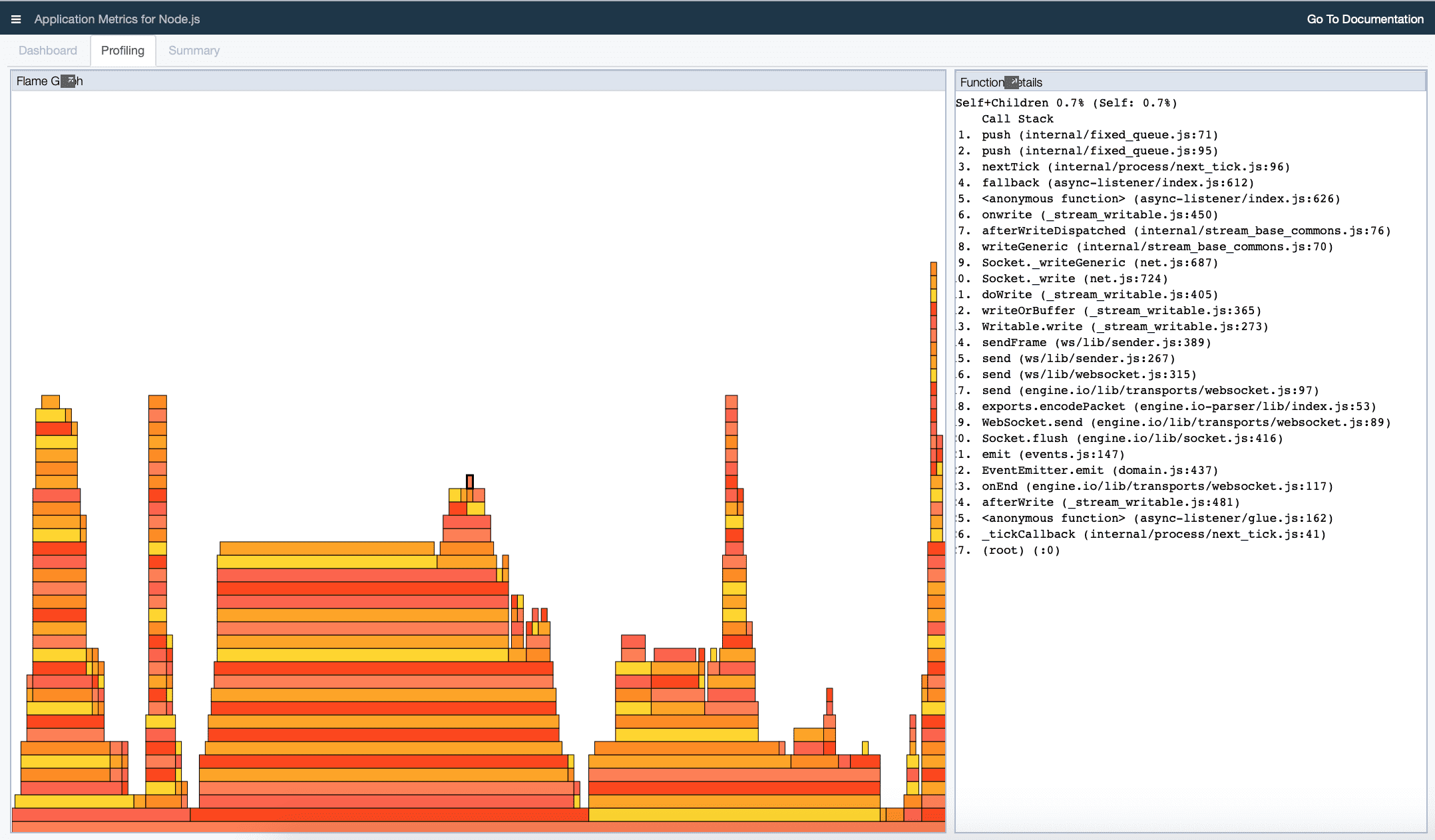 As well as providing performance monitoring and profiling, you can also trigger Heap Dumps and Node Reports through the menu, and see an overview of your application in the Summary tab.

Appsody's debug command provides the same continuous development environment that you get with the run environment. In addition, the application runs in debug and provides the correct configuration to enable remote access from a local debugger.

The following steps show you how that works for your application:

Alternatively you can open a second terminal window so that you can edit the application files.

As appsody debug provides a continuous development environment, any code changes you make will cause an automatic restart of the application. It also sets up the container to allow remote access from a debugger.

You can either use your favourite debugger for this, or use the one integrated into the Chrome Browser as follows:

chrome://inspect in the search bar

It displays a view similar to the following in the window:

Available targets to inspect with the Chrome Debugger

It opens a new panel containing the debugger, attached to your application running inside the continuous containerized debug environment.

You can now debug as you would normally. Additionally, any code change that you make to the project through changes to its source code with automatically stop and restart your application (after which you will need to restart the debugger connection).

Appsody's test command makes it possible to run any tests that your application has inside the containerized environment. To use this capability, your application needs to be provided with some tests, and your package.json file needs to include a test script that runs them.

The steps below show how that works for your application. As the sample application created from the Express Application Generate does not include any tests, you first need to add one.

This responds with output similar to the following:

It responds with output that includes the following:

Note that, unlike run and debug, test executes a single run of the tests rather than a continuous container.

Building your application with Appsody

When you are ready to build a deployable container image for your application, you can do that using appsody build. The build command creates a production-optimized image that is built using the regular “node” Official Docker image from the Node.js community and is then rebased on the communities “node-slim” image. The “node-slim” image is significantly smaller than the regular “node” image, making it easier and faster to deploy to a cloud. It is also more secure because it does not include packages such as compilers (which are required in the regular “node” image so that you can use packages with native add-ons).

The steps below show how to build the container image for your application, and then run it locally using Docker:

This builds a container image for your application, using the name of your project as the "tag" (which is the name of the folder in which it resides). One of the final lines of the output gives the name of the image, usually just above the running command outputs:

Note that the Performance Dashboard is not present, as it was injected as a development-only feature.

You can also use the appsody deploy command to deploy the image to any Kubernetes cluster.

This article covered how to take an existing Node.js application and make it "Cloud Packaged" using the nodejs Appsody Stack. Appsody also provides a nodejs-express stack with a preconfigured Express.js server. The nodejs-express stack includes cloud-native capabilities, such as liveness and readiness checks, metrics, and observability.